This year marks the 30th Anniversary of the first Human Development Report and of the introduction of the Human Development Index (HDI), which is an ideal opportunity to look back at Bhutan’s improvements in human development in the last years: 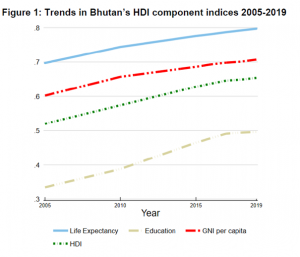 The Human Development Index is a statistic composite index of life expectancy, education, and per capita income indicators, which are used to rank countries into four tiers of human development. In the Report for the year 2020 Bhutan ranks among the countries in the medium human development category with a score of 0.654 for 2019, positioning it at 129 our of 189 countries adn territories. It is worth noting that from 2005 to 2019 Bhutan’s HDI value saw an overall increase of 25.8 percent.

Another index of the HD Report, the MPI (Multidimensional Poverty Index), identifies multiple overlapping deprivations suffered by individuals in 3 dimensions: health, education and standard of living. The most recent survey data that were publicly available for Bhutan’s MPI estimation refer to 2010. At that time 37.3 percent of the population in Bhutan (282 thousand people) were multidimensionally poor while an additional 17.7 percent were classified as vulnerable to multidimensional poverty (133 thousand people).

Substantial Progress in reducing poverty during the last decade

In order to interpret these findings, it seems worth revisiting the Bhutan Poverty Analysis Report of 2017 which provides more up-to-date information Thus, it is worth noting that according to the national poverty line of 2,196 Ngultrum (= approx. 24 Euros)  poverty overall has already declined in 2012 to 12 percent. A further decline  about a third to 8.2 percent is stated for 2017. Thus, it seems reasonable to assume that while multidimensional factors of poverty (such as poor health, lack of education, inadequate living standards, poor quality of work, the threat of violence, etc.), still impede human development in Bhutan, there also are significant improvements relating to poverty as such in the last years. Especially reducing the gap between rural areas and cities seems to be a key challenge for the years ahead. A major obstacle for the equitable distribution of development seems to be that poverty in rural areas (11.9% of the population) is significantly higher than in urban areas (0.8% of the population). In addition, the report highlights problems related to the literacy rate in Bhutan (the poor having a literacy rate of 57% compared to that of the non-poor at 66.8%), and access to education and medical facilities.

Another important aspect of the Human Development Report regards gender equality. In the 2014 Human Development Report a new measure, the GDI, was introduced, which essentially measures gender gaps in human development achievements by accounting for disparities between women and men. The 2019 female HDI value for Bhutan is 0.626 in contrast with 0.679 for males, resulting in a GDI value of 0.921. This puts Bhutan at place 129 out of 189 surveyed countries. In addition to the GDI, the GII (the Gender Inequality Index) reflects gender-based inequalities in three dimensions – reproductive health, empowerment, and economic activity. In the 2020 HDI report, Bhutan has a GII value of 0.421, ranking it 99 out of 162 countries that provided data.

Given Bhutan’s GDI and GII and looking at the information above, it would seem that even though important steps towards gender equality have been taken, further action is still required to attain a more equal distribution of human development among both genders.

The complete HDI Report 2020 can be found at: