Bhutan recorded its first case of novel coronavirus in the country on 6th March 2020. The Prime Minister announced that the government worked on all arrangements under the direct supervision of none other than His Majesty the King. His Majesty was concerned of the unfortunate traveler and advised the government to take care of him and his partner. With the contacts beings traced overnight, the boarding house of the Royal Institute for Tourism and Hospitality (RITH) was identified by the government as a quarantine facility. The students had to vacate their rooms instantly and the boarding house was cleaned thoroughly to welcome the contacts of the first case into the boarding house for observation. Their wellbeing was taken care of throughout the quarantine period. The Office of His Majesty’s Secretariat provided all the necessary amenities such as water boilers, TVs, heaters and extra blankets to make the stay of the contacts comfortable.

Staff and faculty on quarantine duty

As the academic session for the semester closed temporarily at RITH due to COVID, the institute had no option but to let the students go home. Another batch of students who were interning in various hotels were also told to leave the workplace as number of tourists drastically decreased. At the institute, some of the staff and faculty remained on quarantine duty to assist the health officials who took over the boarding house, classrooms and reception area. An atmosphere of calm returned to the Capital city with the results of the contacts being negative after rounds of tests while in quarantine. Few imported cases increased as months went by due to the return of Bhutanese people from the affected countries.

The tourism industry started feeling the brunt of the virus as early as April 2020 due to the decreasing number of tourists. Some tourist guides started farming and some joined government started projects from where they could earn some salary to support themselves and their family.

The number of regular employees dropped as the tourism and hospitality industry was affected by the pandemic. In line with that, RITH, after directives from our parent agency, Tourism Council of Bhutan, started working and planning on the Training and Re-skilling of employees in the tourism and hospitality industry who were laid off due to the pandemic. However, the trainings got postponed by the lockdowns and other unavoidable circumstances. The institute also worked on the Degree Feasibility Document which is a study on the plans and preparedness of RITH to start degree programs in future.

With academic sessions still closed, the kitchen faculty started to work on publishing a Food Map of Bhutan in commemoration of the 40th Birth Anniversary of His Majesty the King. To study and know about unique Bhutanese food from across the country, we did a series of interviews with elders who served the Royal family. Preparations of each food was done as per the traditional methods and photographed.

Snacks and Food for Frontline Workers

Thimphu experienced its first Lockdown on August 11, 2020 after a case from the community. Contact tracings were done immediately and necessary measures were taken by the Royal Government under the personal supervision of His Majesty the King. The health officials, health workers, police, officials from local municipalities and Desuups (volunteers of the National Service Training Program) were working round the clock to plan on the zoning system and to issue movement cards for necessary shopping from identified shops in the zones. The technicians at the Royal Center for Disease Control were also working hard to test every contact and others who were already in the quarantine.

As all frontline workers had to be provided snacks and food during their tiring work, Her Majesty the Queen Ashi Jetsun Pema Wangchuck initiated a noble program to prepare snacks and food for all the frontline workers. Her Majesty visited the Royal Institute for Tourism and Hospitality facility to plan on the program. During the lockdown, students were still in hostel, so there was enough manpower to prepare the snacks and food. As soon as we got instructions that the kitchens at the institute will be used for the snacks delivery program, students, few faculty and staff started cleaning the kitchens and other areas. Few volunteers from other establishments also joined the program. 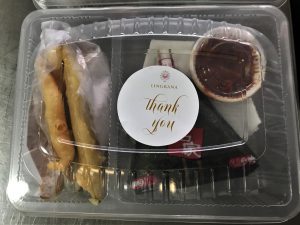 Her Majesty the Queen and Her Royal Highness the Princess Ashi Kezang Choden Wangchuck came every day to prepare and pack the snacks for the frontline workers and food were delivered with a Thank you sticker on every food packet.

The noble initiative of Her Majesty boosted the energy of every frontline worker. Every day, more than 500 snacks and food packets were delivered in Thimphu and as far as Phuentsholing and Samtse (frontline workers along the border areas).

The institute was privileged and honored to be involved in the preparation of snacks and food under the compassionate and immaculate guidance of Her Majesty the Queen.

Welcome to the 11th cohort of Students in September

After the lockdown was lifted, we were able to welcome the 11th cohort of new students to the institute in September and start the fall semester following the necessary COVID-19 health protocols. Work on the Food Map of Bhutan continued with compilation of the pictures and food names. It was launched on 17th December 2020 along with the launch of Druk Kora, a travel promotion for domestic tourists with a slogan, ‘Bhutanese exploring Bhutan’. During the first year of the pandemic, as international tourists cancelled their visits, some tour companies promoted various travel packages to domestic tourists.

There was also an increase in domestic tourists opting for these packages and also their own private travel plans to various sacred sites and lakes within the country. The increase in domestic tourists also helped in supporting local business, but the only downside of it was the littering and improper waste management. The concerned agencies are aware of it and hopefully some actions are put in place to keep every sacred site, lakes, parks and monasteries clean and litter free.

More than 40 days of lockdown

At the institute, students started preparing for their semester exams and completed two papers before the second lockdown on December 20. The second lockdown of more than 40 days in Thimphu prolonged their stay at the institute. However, the students did not get stressed, they continued to do some cleaning and gardening in the campus. During the New Year, they were blessed by a New Year Celebration Lunch as gift from His Majesty the King and on the auspicious holiday of Traditional Day of offering, His Majesty presented cash gift to all the students and staff residing in the campus. The students felt the unconditional love and affection His Majesty showered on them.

As the second lockdown ended, His Majesty gave an audience to the students at the institute and inspired them with wise advises for the advancement of their future. It was once in a lifetime opportunity for the students to hear the golden words from His Majesty.

After the directives from the government to open offices and institutions, students continued their remaining exams. The students were also given an opportunity to join the Desuung Training after their exams and few days of break. 86 students volunteered to join the training program of three weeks during their winter break. Other students, who already attended the Desuung Training did their Desuung duty at their hometown. With students attending the training and deserving few days of break, the spring semester started a week later. The institute was happy to welcome them with a high tea planned to celebrate their accomplishment. The spring semester started on a high note and immense motivation to work hard, learn more and continue to adhere to the COVID-19 health protocols so that we can contribute together in combating the invisible enemy.

The institute is indebted and grateful to our benevolent Kings, Her Majesty the Gyaltsuen, their Majesty the Queens, their royal highnesses for the selfless and untiring service to the nation. As I end this article, His Majesty is on a Royal Tour in the East to oversee measures against the spread of COVID-19, concerned by frequent increase in community infections in the east. The present Royal Tour is a week after ending a quarantine from the visit to the Southern borders.

Together we will overcome this pandemic.